Uncle Sidney ~ Prison Philosopher Says:
"Procrastination is totally a good thing. You always have something to do tomorrow, plus, you have nothing to do today!"

I sure this has been posted before but I haven’t seen it so here goes.

Not long ago I picked up a “slant”, 1928 manufacture. The slant was in good running shape but far from being shelf queen condition. That’s ok because I like users, the older the better and a slant checks all the boxes. It has the good old timely looks of a Quick-Lite but with a built in pump and pleasure of instant lighting. I will post pictures of the slant another time but one of the things I like about it was the original Coleman mica chimney that was on it.
D4FD352F-59E7-4AA3-8901-548F28315D52.jpeg
66E24C97-8B9A-49D3-8D9E-B9311AD0CB06.jpeg
The chimney was in better than average condition, clear name stamp, clear mica and very little rust but like most I’ve found, there was a couple of holes in two panels. If I had another one to rob I might try to replace the broken panels but I don’t. This lantern was from my grandfathers era, a time when you fixed things instead of replacing them, and tried to think what he would do for a repair. Window screen of course. I know people replace whole chimneys with window screen but I wanted to keep as much mica as possible. So I took a piece of window screen a little taller then chimney and slightly wider then the two panels and fastened it in by bending the top and bottom over the edge to hold it in place (last photo is out of order). I also had a Quick-Lite chimney with holes in the top of two panels so I band-aided the screen on it. Kind of a patched up look but I like it and keeps the lanterns original.
You do not have the required permissions to view the files attached to this post.
Marty
Top

I you google around, I think you can get clear mica sheets in sizes like 4"x6" to possibly make a replacement panel.
Top 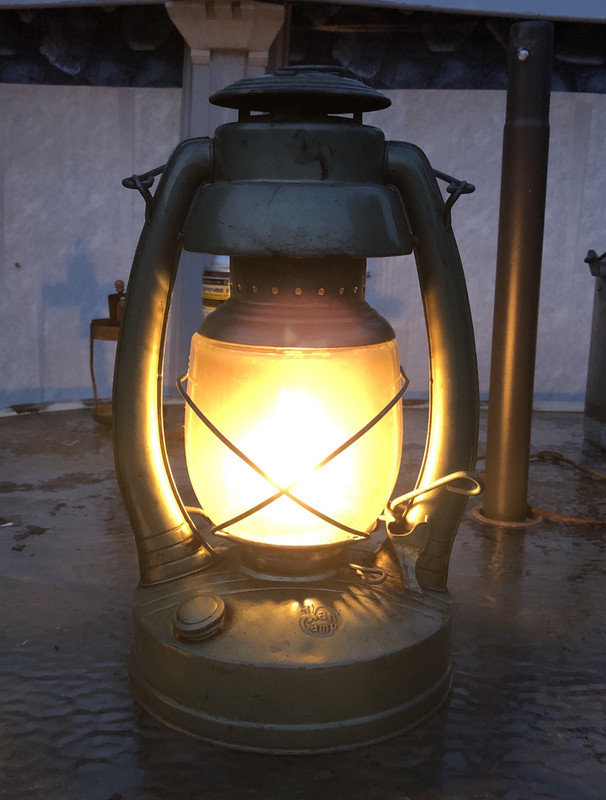 Pretty smart. Matches the rest better if not polished. Fits the period, as you said, when things were fixed instead of replaced
My friends don’t call me “Lantern/lampie Levi” for nothin’,if they did call me that.
Looking for bday lanterns 8/38, 8/41,
10/25, and 8/07
The biggest lie I tell myself is ”I don’t need to write that down, I’ll remember it.”
“People say nothing is impossible, but I do nothing everyday” -A.A. Milne
Now officially ICCC member #1995. Most likely the youngest member with a registered name.

You guessed it, Levi Tomey
Top

Great work. I had one in similar conditions but decided to replace the whole panel and did pretty good. Ill show pictures later
~Pancho~

Alexxx replaced some on his chimney, easier with the two piece panels. Don't know where he got the mica.
Duane
Duane-All seasons, year round backpacker and camper.  So many stoves and lanterns, who's counting.
Top

Leviticus_Tomethreus wrote: ↑Mon Feb 22, 2021 5:57 am Pretty smart. Matches the rest better if not polished. Fits the period, as you said, when things were fixed instead of replaced

Levi gets it. I like the worn patched look. Grandpa wouldn’t have replaced it, just found a patch.
Marty
Top

Im with you Marty. I have some new mica panels but think they would look cheesy thrown in all hodge podge with older panels around a new one. Ive actually been thinking on this and have been thinking of the best ways to age a Fred mica so it wasnt so glaringly new on such an old lantern.
Randy
QL #15, Slant Saver #59, #0269 Turd Hurdler, #0269 Mil Spec Syndicate, Coleman Blues 243 #0269, BernzOmatic Appreciation Club #072, Sears Traveler 2.0 Host #1, and a few others too.
Top
Post Reply
10 posts • Page 1 of 1