Saved threads of Technical Assistance will be moved here. Look here for quick links to Tutorials and rebuilds
Locked
15 posts • Page 1 of 1 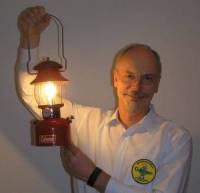 Hi all.
I've finally started to work on my 2nd. BQ lamp. The highly intelligent pre-owner obviously broke the original hex nut and had a replacement glued in. I'd drilled a hole through the new screw, hoping it would loosen the part and turn it out but it won't come loose.

Any idea how I can get rid of that? I probably don't have the proper tools.

Can I dissove the glue in some chemical?

Any better idea???
Thanks, Erwin.

I have gotten these in the same condition in the past. Heating and quenching in cold water, then I used an "easy out", the maybe three times I had to do this it worked well. After clearing I ran a tap down the hole to renew the threads. In an extreme case it could be filled with silver braze, or silver substitute braze, re-bored and tapped to restore it.

Hi guys.
Heat sounds very good. Easy out might work as well. I'll check with a machine shop (I don't have such special tools).

Ed, I also had the idea of re-cut threads but that's the problem. We only have metric tools here.

Anyway, good advice. Thanks very much.

After heating it try using a drill bit with reversed (left handed) flutes. This has worked for me on my job after an easy out failed. Best of luck -Kevin-

Erwin, just check with your machine shop. A little heat and an easy out would probably be all that you need but if you don't have that tool.......
I wouldn't think that your shop wouldn't charge very much to do this simple job.

well , any of these repairs may or should be succesfull , but i think it would be fairly easy to just find a replacment part that needs no repair . it just looks like about any quick lite lamp or air o lamp mixing chamber will work for you . i may even have one in my junk pile but i havent looked yet . are there any numbers cast into the part .

Erwin, that mixing chamber is the same as a QL, right? Efli'd father & brother are here, returning on Saturday. Maybe I could send a part with them? Email or call me - Brent

Do you have an 8/57 lurking in your collection? ICCC Member #731 Ex-Official ICCC person.
Brent
Top

Like to butt in with a question --- does any one know where I can get some of those posts for the QL's?

Thanks
Don B
Top

Hi all.
Thanks for the many ideas. I'll see what I can do.
@Steve: Of course a replacement would be easiest. But please don't forget: I'm by far not as near to any junk yard, garage sale, antique store (or Bob H's parts box) as any of you

@Brent. Thanks for the offer. I'll try to get that part cleaned up. If that doesn't work I'll check for an other part (Then I'll bring this one to Madison and ask for someone's help).
I'm a little busy right now and it will take some time.
Thanks to all, Erwin.
My homepage: http://www.eschaefer.de
Pls. see navigation on HP for Collectors Maps.
Top
Locked
15 posts • Page 1 of 1