Hi all;
I going to show how I replace the felt in a No. 0 funnel. I did a couple of searches
on the forum, and didn't find that someone had already done this write-up, but, I'm
sure soon as this one pops up, someone will find another one. 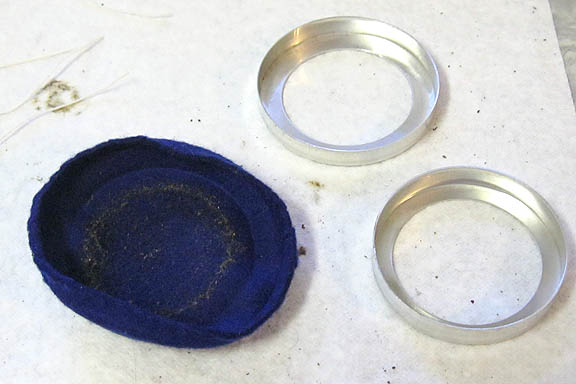 Pull the old filter out of your funnel. If it was in the correct way to begin with,
you will be able to just reach down in there with a finger and pull it out. If it
was put in upside down, you will have to poke it out from the 'spout' end.

When you have it out, pull the two silver rings apart, and the old felt will be
able to be peeled away from the outer ring. 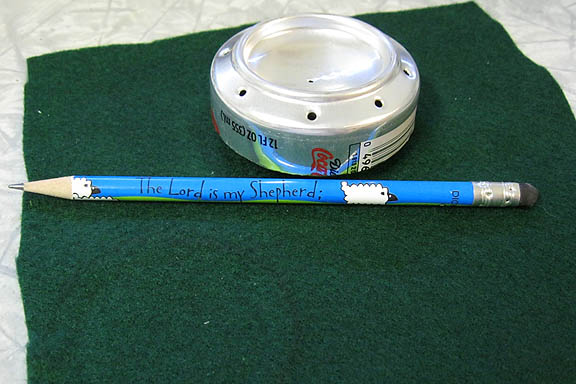 For this to work right, you need the correct thickness of felt. Too thin, and
the filter will be loose in the funnel. Too thick, and it will be quite hard to
get the two metal rings pressed together over the felt. The easiest route is
to simply buy replacement felt from Mike at OCP. It's quite cheap, and the proper
thickness. One piece will do more than one funnel.

I tried measuring the old felt, but it wants to keep its old shape, and is hard
to measure accurately. I first tried the diameter of a Coke can for the new felt,
but that was a little too small. 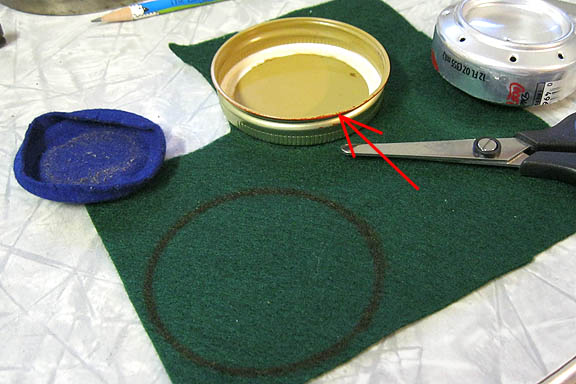 I found that the outer rim of a one pint Mason type lid will make a useable sized
new felt piece. Also, Sharpie works well to mark the felt. 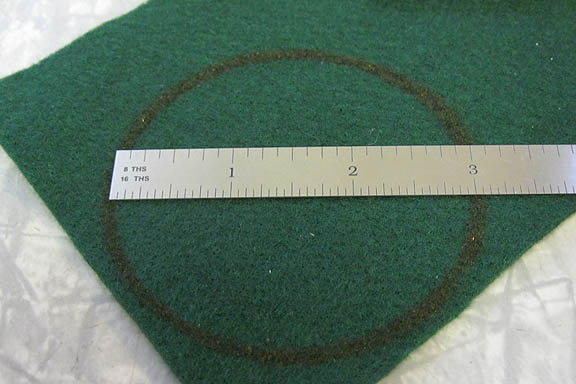 It's right at 3" diameter. Cut it out on the outside of the marker so you have
enough to trim up later. 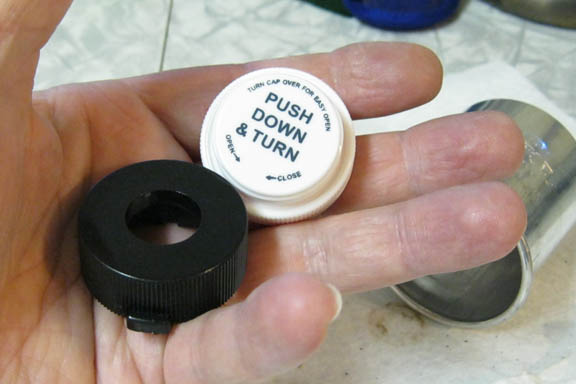 Now, you need something to block up the inside of the funnel itself. Doesn't matter
what you use, as long as it is a diameter that will hold up the larger of the two
rings that hold the felt. It needs to be larger than the hole inside the large ring. 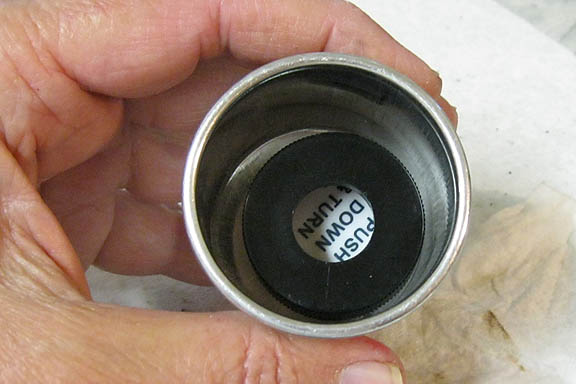 Put your blocking spacer inside the funnel. 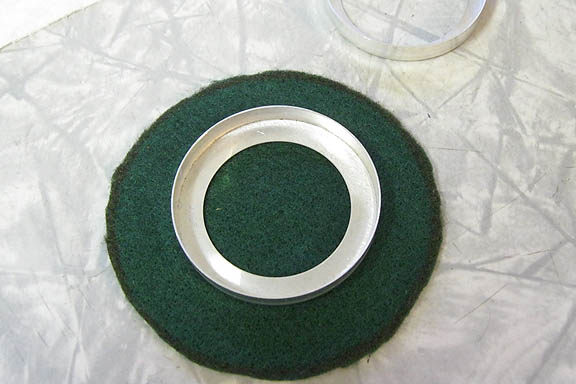 Center the large ring over the new felt. 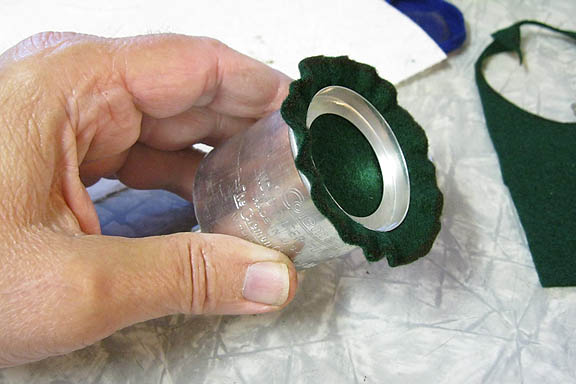 Now, push the large ring in over the felt. The larger opening in the ring must
face up. 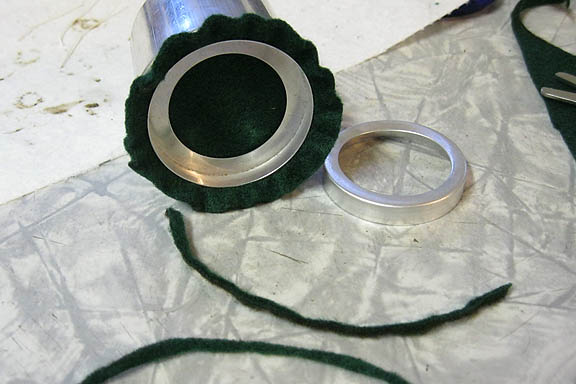 If the felt is a bit too large, trim it just so that when you fold it over into the
large ring that the edge of the felt hits the bottom of the ring. 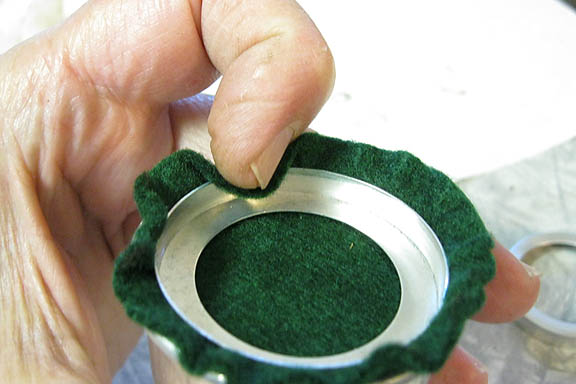 The edge of the felt has to go inside the recess of the larger ring, but when you try
to fold it over, you are going to find that it won't stay put. It would take your
whole family to help hold the edge of the felt down if you go at it this way. 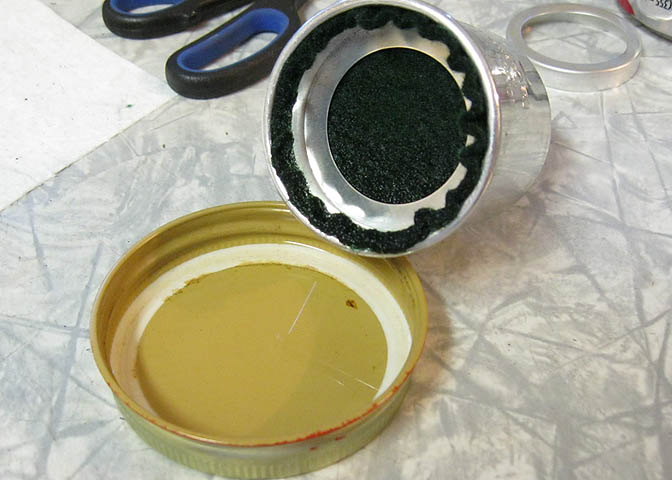 So, get a tin of water, and soak the felt in it. Leave the felt and the larger ring
inside the funnel, and just set it in the water to soak for 15 seconds or so. The
felt will be sopping wet. 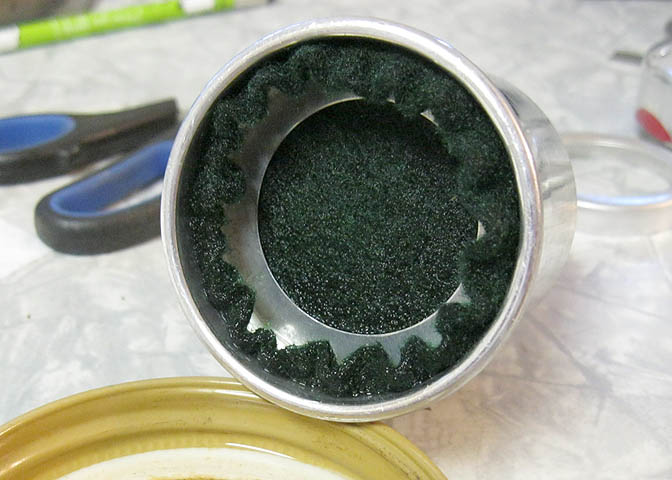 Now when you bend over the edge of the felt, it will stay put pretty well. If you have
large wrinkles where the felt bends over, use sharp scissors to make a few snips at
the wrinkles.

When you have the edge bent over like in the picture above, you can push in the smaller
ring. The open edge of the smaller ring goes down. In other words, the smaller hole
in the ring points up.

This is the main purpose for using something to block up the larger ring inside the
funnel. This way, you have the felt and rings near the top opening of the funnel to
make them easier to work with. 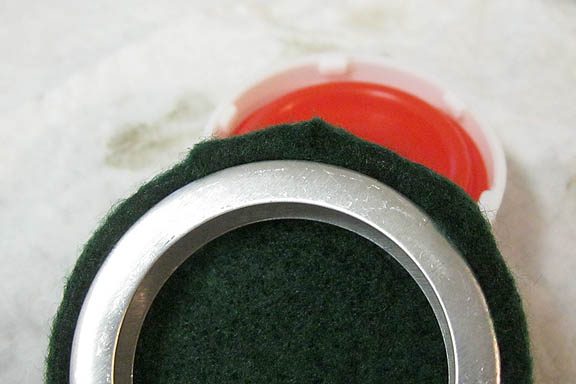 You may find that the edge at one point on the filter ring wants to come out. I've
done about four of these replacements, and this happened on a couple.
Pull the exposed edge out of the rings a little, and dip that part in water again
for a few seconds. Put the whole thing back into the funnel, and pull the smaller
ring out carefully. Now push down the bit of edge that you pulled out some, and
try again. 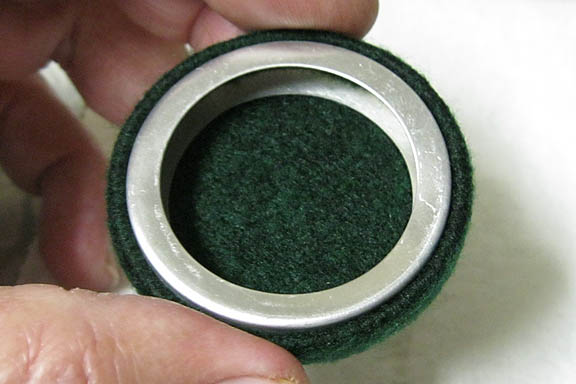 After one or two tries, you'll have it perfect. 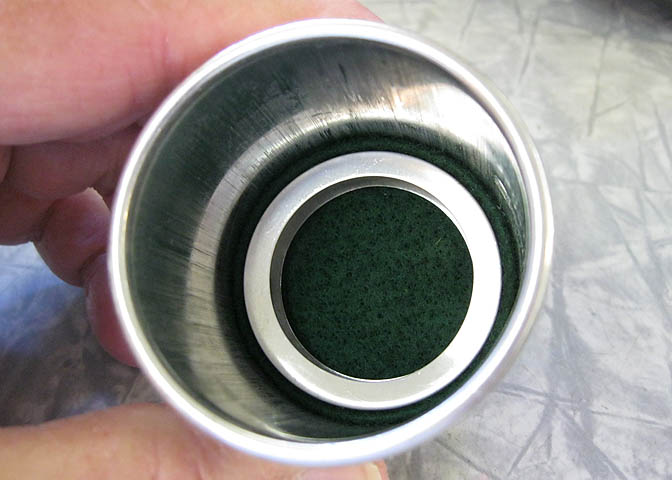 Let the filter dry over night, then put it back in its place (ring opening facing up!)
Good to go for another year.

This whole thing takes about 15 minutes, and your classic funnel will be filtering
like new.

The way felt stops water is just by absorbing it. In practical terms, it will only stop
you getting a few drops, or maybe a thimble full into the fount. That's about how
much water a gallon can of fuel could get into it from condensation once some of
the fuel has been used and there is a good deal of air space in the container. The
felt would soak up about that much and it simply holds it until it evaporates. It is
the same way a washcloth holds water. When it gets "full", the water starts dripping
out, but up to that point, it will all stay in the washcloth.

If the felt gets saturated with water, the water will simply start dripping out. In
other words, if you have a gallon of fuel with a pint of water in the bottom of the can,
the felt isn't going to do anything to stop that.

It is very good at filtering particles, and will stop most of those that would be
of a size to plug a generator orifice. I like these funnels for filtering wash-out CF,
like when you pour a cup of fuel into a fount to rinse it out. If there's no big quantity
of water in there, I filter that fuel and use it for cleaning, or in something with a big
orifice like a 295 or HGP.
Dean -Midnight Kerosene Ritualist--Deans Machine:  www.deansmachine.com
ICCC #1220.   275 commiseration #0018.
"In Him was life, and His life was the Light of men."  John 1:4
Top

I like.. so you intentionally put the assembly in upside down to make it easier to replace next time. !!
Robert (AKA Curly)-- Heart-of-Texas! "Keep 'Em Working"
MILSPEC_OPS & 275 Appreciation Syndicate Member #9999

hm..... that is interesting. i recall seeing some with no ring showing.

ah well, I'll be sure to do it this way in the future
Robert (AKA Curly)-- Heart-of-Texas! "Keep 'Em Working"
MILSPEC_OPS & 275 Appreciation Syndicate Member #9999

not that the color makes any difference but all the usa funnels i have used blue felt , but i have a few Canadian funnels that originaly used geen felt .
Steve , Keeper of the Light !!!
Top
Locked
9 posts • Page 1 of 1