A fellow member of the ICCC has done some research and has allowed me to share that information with the members of the Forum. The research material was from Coleman catalogs showing cans of Coleman fuel. Here is the information and I want to thank Ron Becker for sharing it with us.

If anyone has a collection of Coleman fuel cans, we could add pictures to the related years in the descriptions from Ron's research.

Here is the information:

1979 - 1983 - Stove, Lantern, and Catalytic Heater. Size amount on can. Has white plastic cap. Says on can Fuel for Gasoline Camping Appliances. - 1 gal. only

This information will be moved to the Tech Assist Archive in a few days.

This should help to illustrate Ron's findings. This post was modified much later than the others on this topic, so it may make earlier posts below seem redundant or not make complete sense: 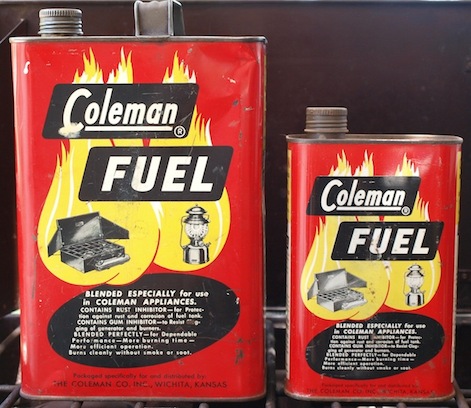 1956 - 1957? (Ads and catalog)
This style first appears in 1956 magazine ads and runs until at least 1957. I have no data whatsoever for 1958, so I can’t verify when this one ends and the next one begins. There is also one with the dual cap/pour spout somewhere in this date range (below - photo by KellyBlues. 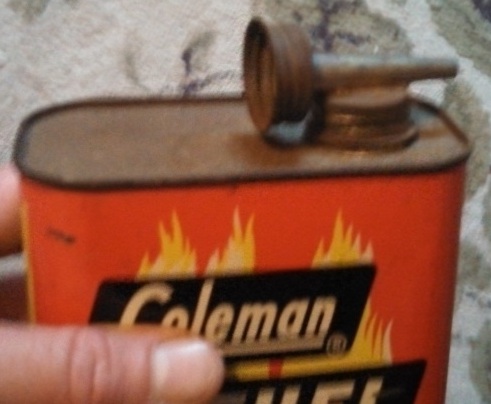 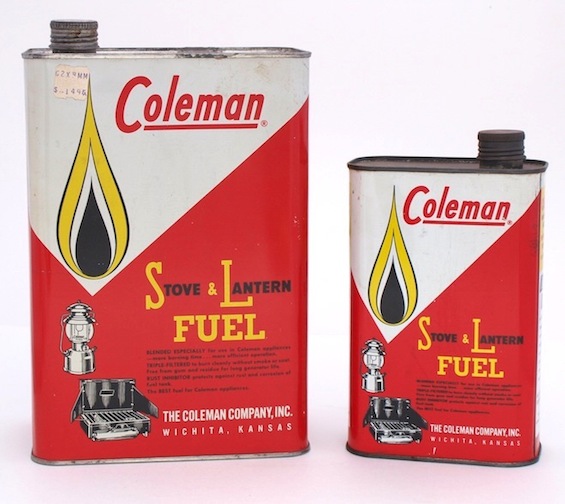 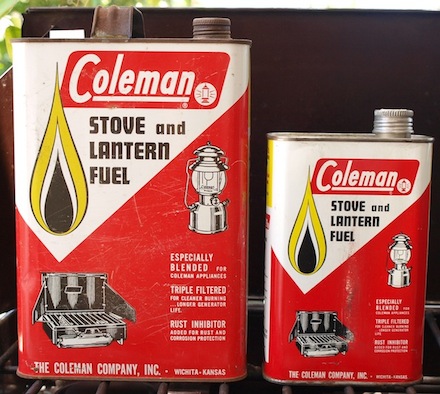 [above and below - front and back] 1963
I have no record (catalogs or ads) of this style at all, it seems to me to be a “transition” between the last and the next, so I’m declaring it to be a 1963 only version. The other side of the can is similar to the one above, but not identical. If only I could find a 1963 catalog... 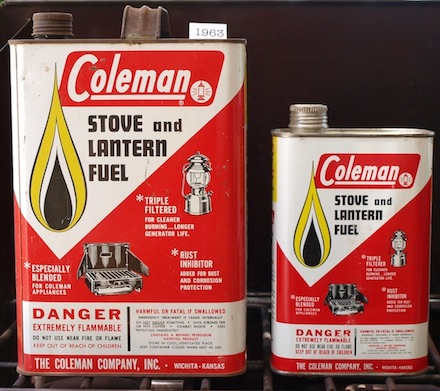 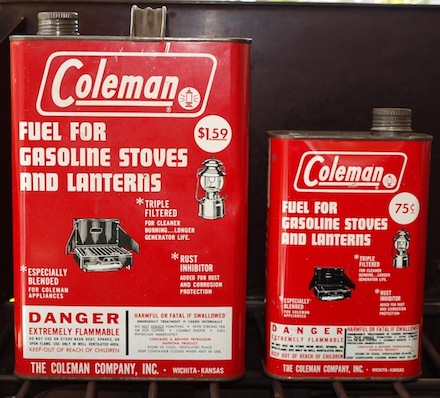 [above] 1964-66 (reference: Coleman catalogs)
There may be minor variations in text arrangement on some of these and the next versions. 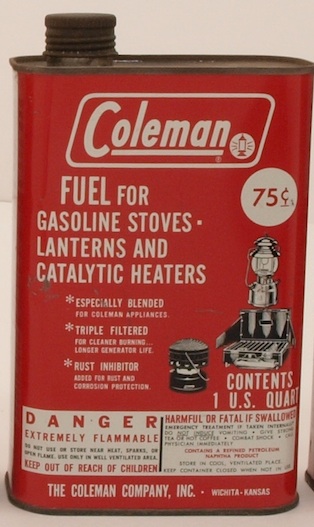 [above] 1967-68 (reference: Coleman catalogs)
The heater seems to have been added in 1967, at least according to the catalog. There may be minor variations in text arrangement on some of these. (I don’t have a 1 gallon example of this one yet, but you can see one in OldSoul's post #13 below.) 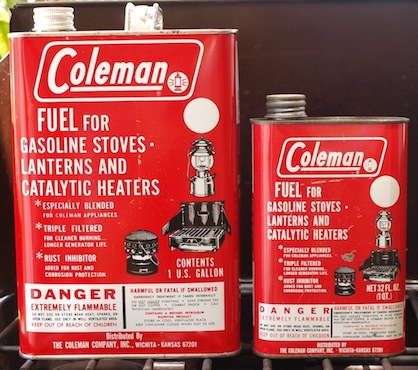 [above] 1969-73 (reference: Coleman catalogs)
The fixed price no longer showed in the catalog in 1969. There may be minor variations in text arrangement on some of these and the next version. (The one on the left is the one Warren referenced as NOS in the post below this - it's still full!) 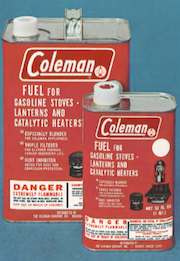 [above] In 1974-76, the cap has a white plastic safety wrap, but otherwise seems the same. (Catalog photo) 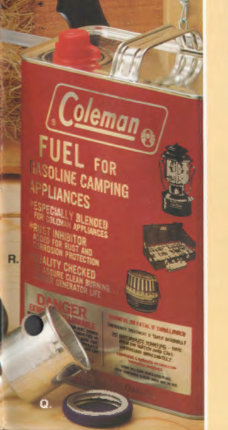 [above] 1978- (reference: Coleman catalogs)
The cap is a twist and pop type. Note new heater style and silver warning background. (No 1977 catalog available)

[above] 1979 - 82 (reference: Coleman catalogs - catalog photo)
The cap is again the white plastic safety type. Note white warning background. (There are no fuel cans in the 1983 catalog, and I only have one catalog beyond 1983 available) 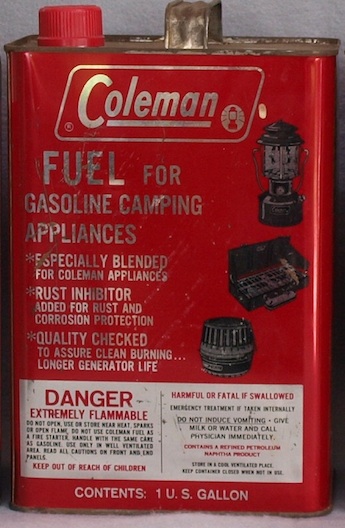 [above] Unknown date - I suspect it could be just after the one above it, but have no catalogs to compare to. It does have what is probably a 220K, which ended in 1983. The cap is a red plastic safety type. 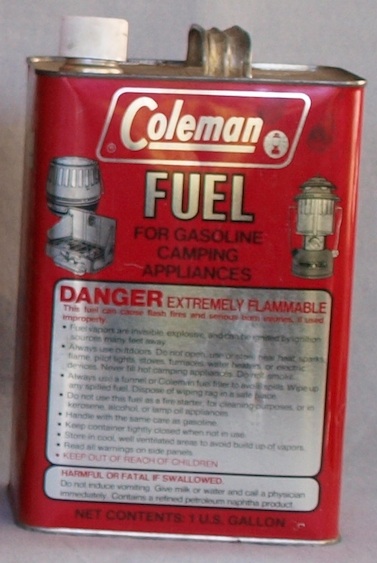 Here's a newer one, there is a code on the bottom, when compared to the code on new cans makes me think 1992: 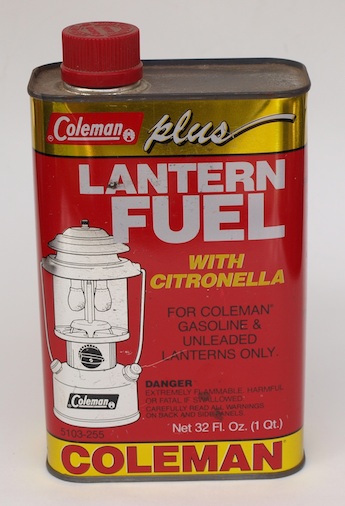 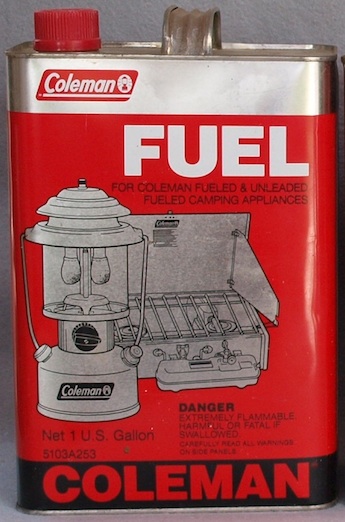 1990’s - 2000’s?
The can above is English-only and so is probably older than the one below with multiple languages. 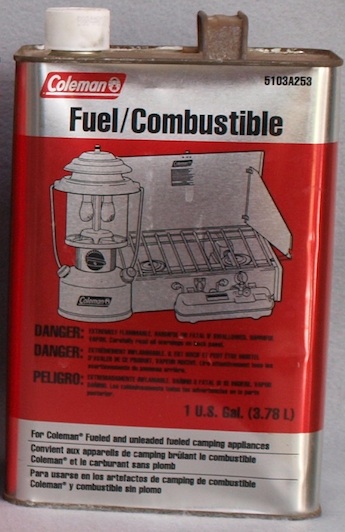 I don’t know the dates on these at all. Maybe some of you have some idea of when they came out?

It would be great to have a picture reference for all of these.

Add to this the Citronella added fuel cans. I think Greg got mine. Maybe he can post a picture. (quart size)

Also I have a made in England can. Greg I think it is in the box of stuff you have if you can find it. I don't think I sold it. (quart size, but probably metric)

It shouldn't be too hard to get all this lined out. Let's save the off brand cans for another post.

John if I had a way to get it to you, I have an NOS red fuel can like that. Still have the metal plug under the cap sealing the spout. (I have 2, unless I gave one to Greg or Steve.)

The modern (2000yr+) cans have changed over time also.

If you don't hear back on a PM, try to EMAIL me.
ANTIQUESWV on Ebay
#1 in the 223B club and the 555 Burner club
Gatlinburg, TN
Top

Warren, I would like to get one of those! [I guess I do have a 1qt example of that version, but a 1gal would be nice.]

NICE INFO! I have several different cans. All part of the story.
Top

Murff, thank you for starting this thread.I agree Warren, a picture of each can would be great. I have a different Canadian 1, I think, but will have to check and post a picture

This is just another way you guys are influencing me.. I'm primarily a user of Coleman GPAs, not a collector. Over the last year there have been some fuel can pictures. I thought that was dumb.. Now, I must admit, I've found a place to put some of the oldies I just happened to have around. Nothing impressive. I'll show you when I can. My better camera has died and my phone camera needs better light than I have at this time of day.
Lamplighter44

I support putting these in a chronological post for easy reference.

So what's the story with these? (images swiped from the 'net). I assume they are all European. (my that clear plastic bottle looks flimsy...)

I can stop collecting anytime. I just don't want to.... Soooo.... How much do you want for that?

Here's my best two. The qt. was found inside a really nice three leg slot 413E. The gallon all by itself at a garage sale where the owner informed me, "oh, I sold the lanterns last weekend". ;-(

Wife: "Whataya gonna do with all those stoves"
MilSpec Syndicate member # 59
Looking For US Made 11/59 Lantern
Donn
Top

Here is the Citronella quart sized

here is another Can can, shape is way different than the 1 st 1 I posted

Here is an oldie I picked up this summer!

One must always take the high road - all other roads are dead ends.