Uncle Poo Ping ~ Ancient Outhouse Philosopher Says:
"'Just imagine how perfect life would be if pizza made you skinny!" 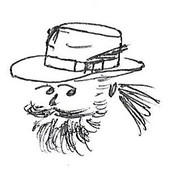