I realize it’s brown but is there something particularly specific about certain things that make it a supposed POS???

I just got one yesterday for $10 and while it didn’t have the original globe. I got lucky in a purchase today to get 3 of them (original 275 globes) with some other supplies from someone selling them on Craigslist.

So needless to say I now have this… 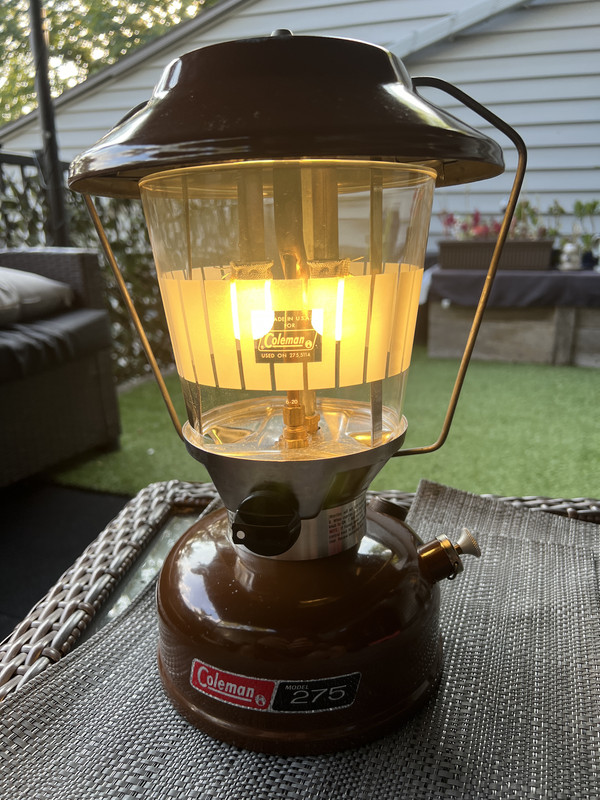 I have to say it was kind of wonky trying to start it as my lighter wasn’t working so I turned the valve off and let it sit for a few seconds but when I tried to relight it I got a huge fireball!

OK I will stop talking, and await further “conversation starters”!

— L.J.
In the foothills of the Berkshires, Western Massachusetts

ICCC #2197
Visit the Coleman Blues 243's Current Membership
Coleman 275 Appreciation Syndicate #1980
I love the smell of naphtha in the morning!
"Ain’t no need to watch where I’m goin’; just need to know where I’ve been" -Tow Mater
Top

OK, so I have experienced that part of it… 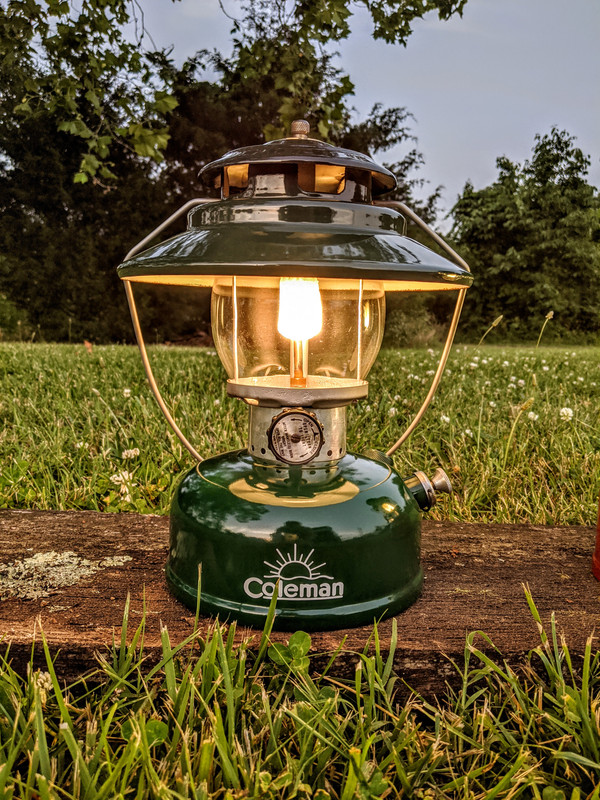 I've always had good luck with them myself... Granted I've franked more than I've kept whole, but of the 5 or 6 I kept original, they lit and run perfect...
Toby Garner, from SW Missouri
ICCC #1939
Top 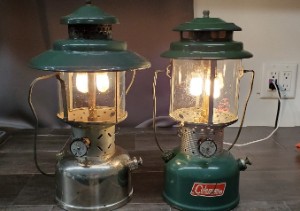 I believe murff coined the name. Legend has it he was not enjoying working on one and called it a turd.
Mike
ICCC #2030
Coleman quick lite crew #51
Coleman Blues 243's #171
275 syndicate #0429
Love flathead Ford's, tropical plants and Coleman lantern.
Top

So the crazy thing I can say about it is that the nut that holds the burner/air intake assembly isn’t anything I own for wrenches. I tried both SAE and metric and a 19mm was the “Closest” I had for it to be gently turned. The frame hold down nut is 18mm which surprised the heck out of me.

So I can understand why it might have acquired the nickname.

So where was the valve located? Under the frame rest?

Reason I ask is I have noticed that if I turn the dial all the way to the right in order to turn it off. It almost seems like it’s turning it back on so I have to back off to the left for it to seemingly turn it off?

The Schrader valve is located on the fuel pickup- it screws into a brass assembly in the 275. The 275A is sometimes a plastic fuel pickup tube. The symptoms you're describing lead me to believe the Schrader valve needs to be replaced- there's a little rubber seal at the end of it that's 40+ years old and likely not doing it's job.

The 275 I've found particularly difficult to break the fuel assembly from the fount. The thread locker they used seems to have cured really hard for the last like three 275s I've worked on. Break that free, purchase a bunch of fuel-safe Schrader valve cores to replace the one you got, and you should be good to go.
-Adam
-Interested in anything late '82 or 3/55
-Coleman 275 Appreciation Syndicate #1208

The bail seems like it was destined for this.

There are like a million "MADE UP" reasons why these are called a turd. Half of 'em think they know, and most of them think it is because it is brown. The other half of them think it is because they just don't know how to work on them 'cause they are different than 220 models. The third half of 'em are sleeping with Rod Serling (and the fishes).....

Very similar to a 220 model actually, and built like a tank. It just happens to have a schrader valve in the F/A tube, (which is made of brass, just like the earlier 220 models, so sturdy as all get out, but...

Someone, at one time did not know how it worked, because it was an advanced design. (And man, they are a very well designed lantern, too.) Being brown is just a fluke. In the 1970s everything was either "harvest gold" (Yeller) "Avocado" (nasty green) or "Brown" (brown) and in the mid to late 1970s there were no other colors, except black or tie-dye. Just look at refrigerators and stoves/oven ranges of the time. EVERYTHING of that time was one of those colors. Also, it was like a magic time: (Shhhhhh.... Gasoline was ONE dollar for two gallons. It was a wild time.)

Well, a certain genius here, whom I love dearly despite his finger signals and mooning in my direction, just could not figure out the way a schrader valve lantern worked, 'cause he had only worked on NORMAL Coleman lanterns that had a proper Fuel/Air tube. The "new" 275, which, as I said was built like a tank, (Like an M60-A1 tank.. I'm talking like a brick outhouse, man) befuddled my beloved friend and he could not speak kindly of it so called it a barnyard name. I won't repeat that here, because I'm a moderator (for today, anyway) and my friend would probably deny it anyway, and besides he has senility over me, so I have to tread lightly. Sooooo, he couldn't get it going and kicked it to the curb while it was on fire and called it a bad name, which just don't go here, law dog, and it was translated into the word "turd".

I like my 275A, it is a solid running lantern and is very bright. Even though it is a turd

And in a cruel twist of ironic fate, it was designed by Coleman to celebrate the Company’s 75th anniversary in 1975. An appropriate legacy today…
Cole M. 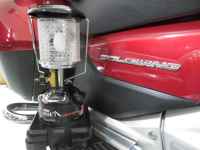 I love my 275's. I have a bunch of them. All of them have been strong runners.

Here are a few of Murff's customs that he brought to the Bozeman Convention. 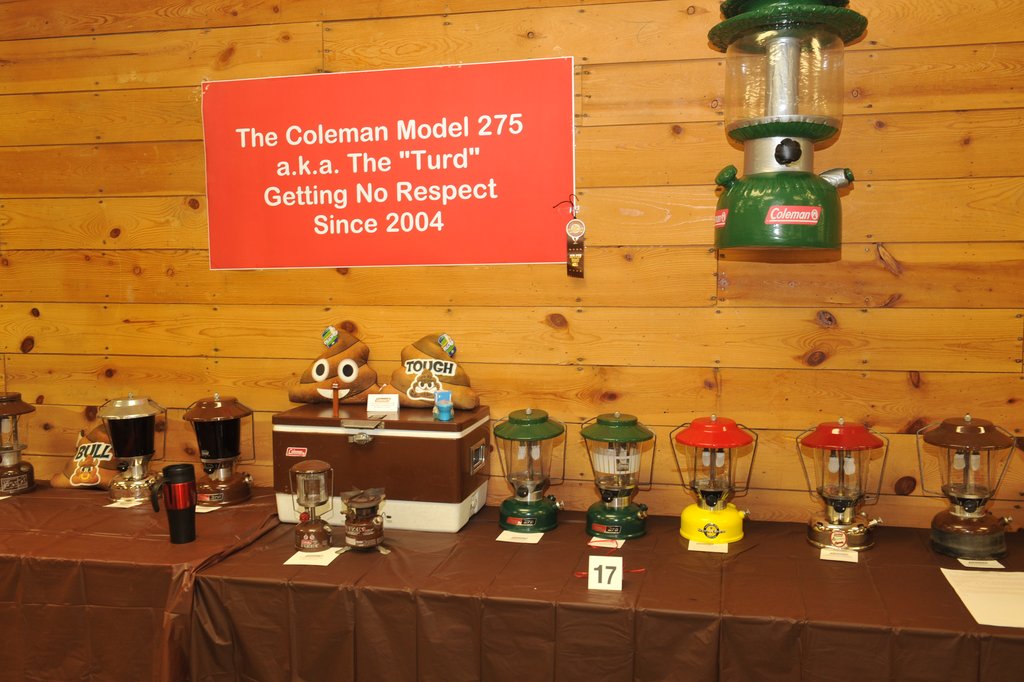 And yes, they do polish up! Here is a gold plated one that was given to the ICCC Convention host in 2021. 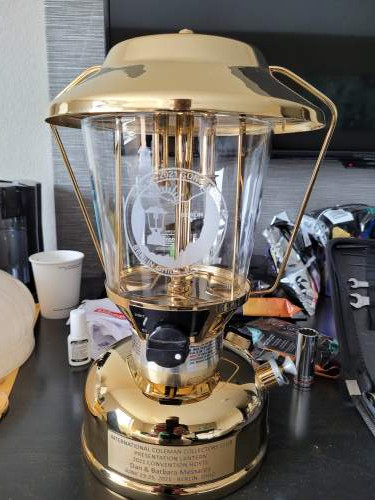 My 275 was a chore to make it work, but it is a dependable and very quiet lantern. If I want light and to be able to hold a normal conversation, this is the one to light.
The Squirrels are up to something....

Man, if Coleman had just made 'em in blue or red. I grew up in the '70's and just seeing a picture of a kitchen stove or refrigerator from back then still makes me slightly nauseous.
Jim
Top

Maybe everyone should just stop calling them turds? I mean, I don't call my 1980s, Coleman 400 stoves, turds.

The definitive answer to the original question is: a Piece Of S**t is, by definition, a turd.

How many en blocs? I love the looks of the 275 but mine is a little dicey to light up. Likes to burb like a dragon at times.. I need to play with it more and find out a light up method it likes...lol
Top

Okay, it was asked for, so here we go!

1. The Green Unripened Turd. It resides in the shed with its twin (not pictured): 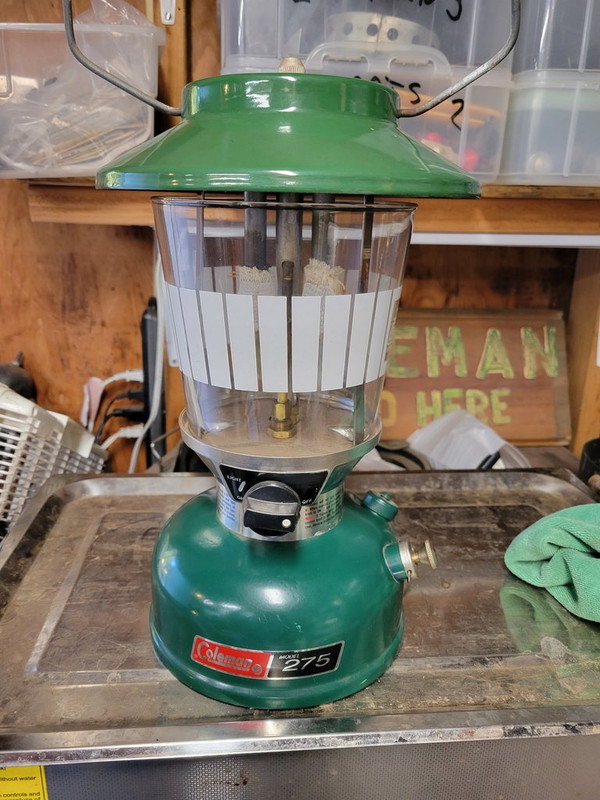 2. The Turd Williams! A crappy tribute to the Ted Wiilams: 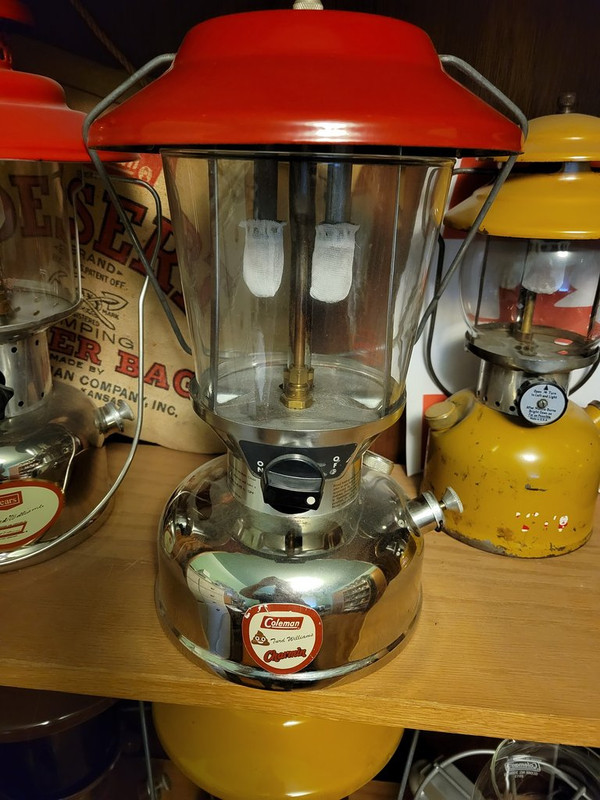 3. The Gold Bond Turd with the rare Urine Yeller Globe: 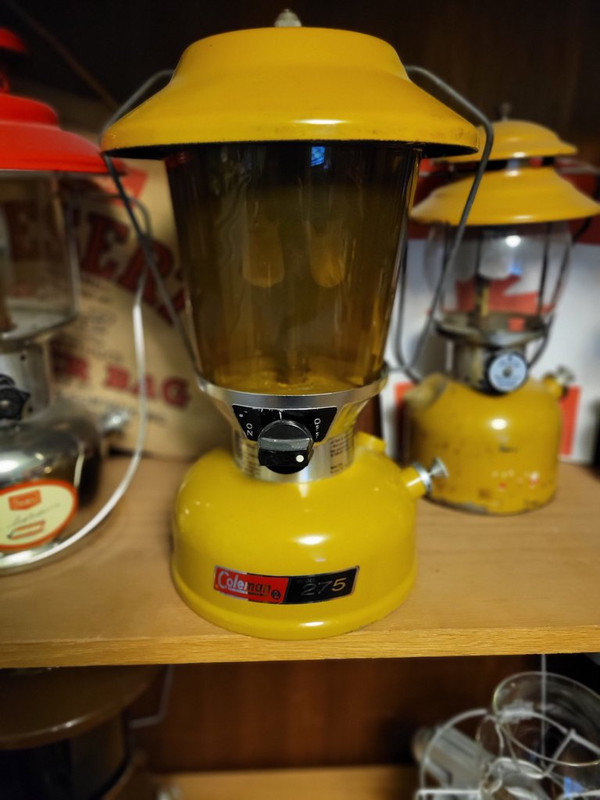 4. Just a Turd but with the rare Brown Turd Globe! Only two known to exist (short of the guy that smeared $#!+ on a clear globe). 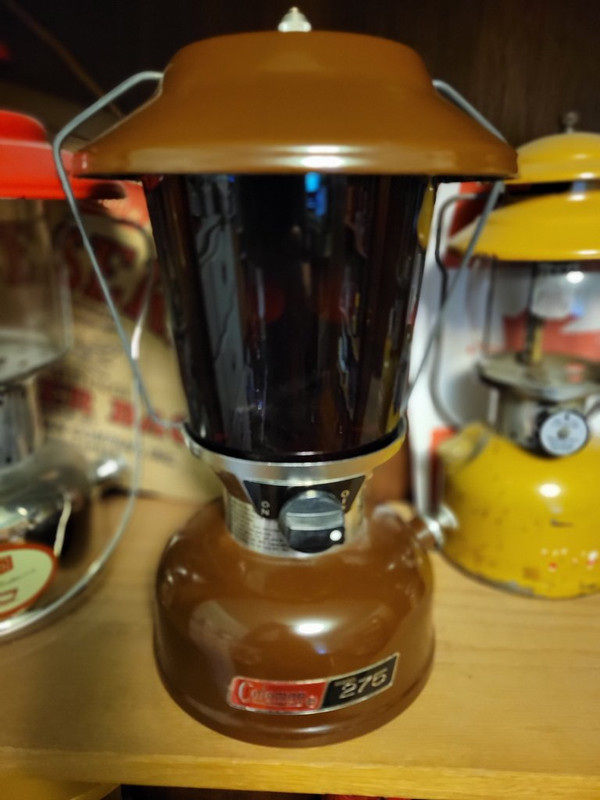 5. My favorite, "THE TURDINATOR"! Looks a lot like Arnold at the end of the first Terminator movie when lit: 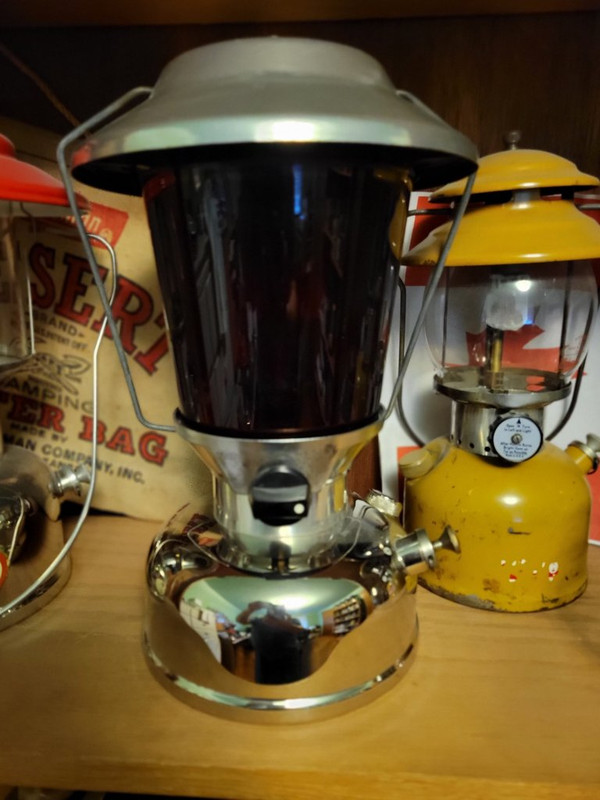 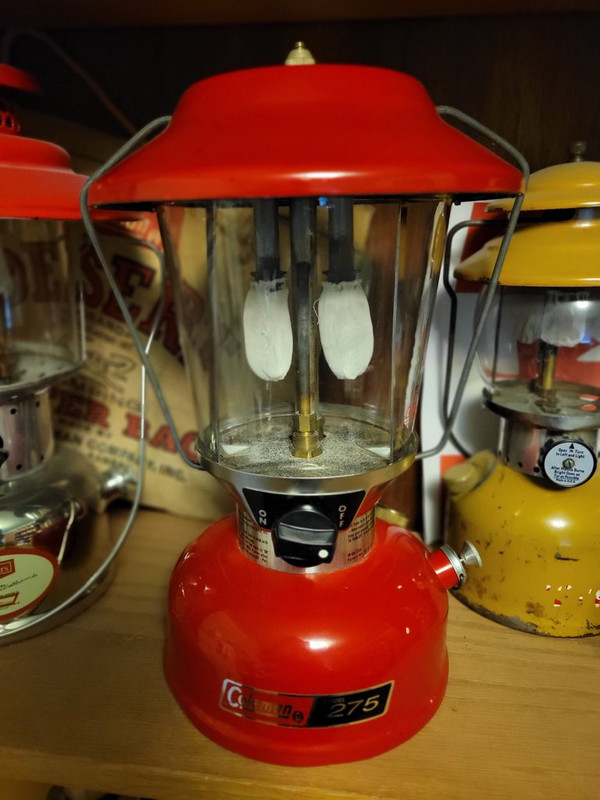 Dean may be right. Coleman should've made these in red!

From the 2007 ICCC Convention: 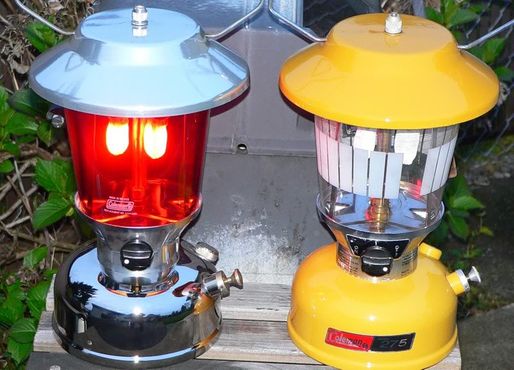 A turd for every occasion!
— L.J.
In the foothills of the Berkshires, Western Massachusetts

ICCC #2197
Visit the Coleman Blues 243's Current Membership
Coleman 275 Appreciation Syndicate #1980
I love the smell of naphtha in the morning!
"Ain’t no need to watch where I’m goin’; just need to know where I’ve been" -Tow Mater
Top

How many en blocs?

At our age we don't have to win the war, just mess someone else's up

I see absolutely nothing wrong with those lanterns, color, shape, etc...
Top

I was able to find one and that’s my Birthday Lantern! 275A 5/80 my only bday lantern